Most people have never heard of PPP because most men keep silent about this impossible to hide condition. PPP refers to Pearly Penile Papules those white pimples around the head of the penis.

Brave enough men may have gone to their doctor who may not even know what these flesh coloured dome topped bumps are or told them they were perfectly normal and just forget about them and live with it? Even though PPP don’t have great physical impact they certainly affect the individual at a self-confidence and psychological level. Will they ever go away? No. They even become more visible in the erect state, how embarrassing!

PPP are usually noticed at a pretty young age, around puberty. Many affected men live with the condition and keep it like a “secret” ? Many men I see have developed serious psychological problems because of the pearly penile papules. For fear of being ridiculed or worry their sexual partner many men suffering PPP refuse intimate interaction with others and avoid sexual encounters.

The condition is one of the most common problems men have in the genital area. These PPP are called Pearly Penile Papules and they occur in up to 30% of men. Some men have more papules than others but usually they range between 150 and 250 pimple like skin tag type protrusions around the rim of the penis. We don’t know what the cause of PPP is but one thing for certain, these pearly penile papules are not contagious and in no way related to STD or genital warts.

I treat those embarrassing pimples down-there by using either SWD short wave diathermy or carbon dioxide laser. These treatments essentially destroy or vaporise the pesky little papules. Both procedures are completely painless. I administer the SWD or CO2 Laser treatments after administering local anaesthesia block on the patient’s penis area. Once treated these annoying papules are gone once and for all with a confidence rating of over 90%. Two to three weeks later it is recovered and ready for action!

What do you think? Did you find this blog helpful? Why not join me for meaningful and educational social media posts on Instagram I’d love to hear your comments comments@castleknockcosmetics.ie or tweet me @dr_h_kahlout. If you found this blog helpful I’d appreciate a positive review on Google Review and our Facebook page.

Change of weather often calls for change of wardrobe to winter clothes but also it calls for change of skincare routine. During the winter months our magic wand starts with considering that colder weather causes dry skin leading to broken shabby texture. Moisturising regularly with Demani Hydrate Serum help substitute the lack of moisture in the air. Remember that winter sun also causes photo-aging, even if it’s dull and raining. So on with the SPF and protect from that unwanted winter sun-damage. Why not consider broadband photofacials light laser treatment to get rid of accumulated sun-damage and micro-vessels over the summer brighter weather.

What do you think? Did you find this short blog helpful? I’d love to hear your comments comments@castleknockcosmetics.ie or tweet me @dr_h_kahlout. If you found this article helpful I’d appreciate a positive review on our Facebook page

In the not so distant past facial rejuvenation was focused on skin surface treatments like chemical peels, light therapy and skin resurfacing coupled with the more invasive surgical tissue facelifting procedures. Recent advancements saw treatment expanding with cosmetic doctors understanding of muscle relaxation through neurotoxins and more importantly the advancement of our knowledge of how loss of fatty tissue in the face results in the classic features of the aging face. At Castleknock Cosmetic Clinic we can now add volume to restore the youthful luster of the face. In order to achieve a natural looking correction for my patients, I use a combination of muscle relaxing injections, skin resurfacing and tightening, as well as volume restoration. In suitable patients, such combined approach will yield results similar to formal face lifting procedures but without the downtime and extensive trauma. 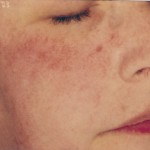 Thread veins, also known as telangiectasia or spider veins, happen when capillaries (the smallest of blood vessels) become unduly dilated, spreading blood to other capillaries and leaving a fine red or maroon coloured web-like appearance just under the skin. They can be almost anywhere on the body, but are most common on the face, usually on the cheeks or nose, and the legs.
Unfortunately, 55% of us will be affected by thread veins at some point. Many women find that they suddenly appear during pregnancy, possibly due to an increase in the blood coursing through our blood systems, as well as fluctuating hormone levels. Thread veins can occur as a result of changes in the menstrual cycle. Other causes of spider veins are trauma damage, exposure to sun and cold conditions and having a job that involves prolonged standing, we all heard of the expression “weather beaten”. Thread veins can be an inherited condition.
At Castleknock Cosmetic Clinic Dublin warns that spider veins may be linked to deep varicose veins, so it is always worth getting them checked out. The varicose veins must be treated before the thread veins are tackled.
Few dietary changes could help lower your risk of thread veins. Avoiding spicy foods and alcohol should help. Vitamin C rich foods could help strengthen the capillary walls. We also recommend foods rich in vitamin E.
The most common treatment for thread veins on the legs is microsclerotherapy, where a solution is injected into the veins to stop blood flowing through them. For facial veins we tend to use vascular lasers, either NdYAG 1064 or KTP laser. With appropriate treatment we can expect 90%success rate for the elimination of facial veins and veins can be cleared often after one or two sessions, although two to three sessions are needed for more complicated cases.

It’s understandably normal to be a concerned if you notice any blemishes on your penis. Small growths at the head of the penis could possibly be pearly penile papules, or if you are sexually active, you could have genital warts; which sometimes can be mistaken from pearly penile papules. Read on to learn more about PPP and how we manage them at Castleknock Cosmetic Clinic Dublin.
Throughout many species, mammalian penises have developed keratinized penile spines along the glans and/or shaft, which may be involved in sexual selection. These spines have been described as being simple, single-pointed structures or complex with two or three points per spine. Penile spine morphology may be related to mating system.
Felines, especially domestic cats, are well known for having penile spines. Upon withdrawal of a cat’s penis, the spines rake the walls of the female’s vagina, which may cause ovulation.
Penile spines in chimpanzees and mice are small surface projections made by the piling up of keratinized cell layers in the outermost skin surface.
In contrast to chimpanzees and mice, the common structures found in humans are substantially larger, appear to be an outgrowth of both surface and underlying connective tissue layers, and lack the rich innervation seen in other animals.
Human Pearly penile papules (PPP) are small, benign physically harmless growths. PPP vary in colour and can be pink, white, yellow, or translucent. They’re normally small tentacles measuring from 1-2mm wide and could reach 1-4mm long. The shape, colour, and size can vary between individuals, but all the papules that one person has will look the same. The papules are usually found in a single or double row on or around the head of the penis.
Medical experts are not completely sure why some men have PPP. Since PPP aren’t harmful in any way. They are considered a normal penis head variation. Additionally, guys can have PPP regardless of their race, geographic location, or sexual preference. Several reports say that uncircumcised guys may be more likely to have them than those who are circumcised.
No, PPP are not the same as genital warts. Genital warts are caused by HPV; a sexually transmitted infection. They are small, cauliflower shaped growths that can also develop on or around a guys’ anus, thighs, groin, scrotum, penis, lips, mouth, tongue, or throat. Unlike PPP, genital warts are contagious.
If you’re ever concerned about any lumps or bumps on your genital region, you should make an appointment with your health care provider.
What is the treatment for PPP?
Do not try to pick at your pearly penile papules (PPP) or pop them, and do not use an over the counter “wart remover” as these medicines are not meant for use on your penis. There are a number of treatments available at Castleknock Cosmetic Clinic Dublin; to effectively remove the PPP and include hyfrecation and ablative lasers.